The Important of Land Acknowledgements

The truth is, many people don’t understand land acknowledgements largely due to growing up with improper education around colonization and the myth that Christopher Columbus ‘discovered’ the Americas. Thankfully, it is now widely known how incredibly wrong this is and that the America’s were already inhabited by many diverse groups of Indigenous Peoples who have been here for more than 10,000 years. However, this understanding is really just the beginning to the true history of Canada and its attempted genocide of the Indigenous Peoples. It is a long hard journey of truth that leads to a path of reconciliation and a great place to start is in understanding the importance of land acknowledgements.

Let’s break it down.

Historically, a land acknowledgement is a traditional practice shared amongst many Indigenous groups to recognize the land and territory that they are visiting. As peoples, we had extensive trading practices with surrounding communities, so it was greatly important to acknowledge our gratitude for visiting another groups territory as well as to share where we come from.

Indigenous peoples have very strong inherent kinship beliefs to land and territory with most of our creation stories telling of us originating from the land, our collective first Mother. Our way of life is intrinsically intertwined with the natural world. Everything we need to survive is provided from the lands and we’ve been able to maintain our ways of life for thousands of years by working to preserve balance with what we take and how we nurture and care for continued prosperity. Through generational teachings we learn to live with and show respect for the land so that it can always thrive and be there to take care of all future generations.

When colonization began, one of the first tactics was to remove Indigenous Peoples from the land, attempting to sever a connection that runs thousands of years deep.

Throughout colonization there were many attempts of genocide of the Indigenous peoples; broken treaties, control of resources and food access, residential schools and sixties scoop to name just a few. These tactics involved deep abuses of Indigenous Peoples, often focused on our young children with the intention of destroying their relationships to land, family and community so they are unable to carry on our ceremonies, traditional practices and ways of life.

Colonial government policy was enforced upon Indigenous groups, our territories were deemed ‘crown lands’ and Indigenous communities were coerced onto small allocations of land called reservations, which were often in unfavorable locations with little access to traditional foods and clean water. Being forced into a situation where we were no longer able to care for ourselves in the only way we’ve ever known resulted in dependency on support from the colonial government, just as they had intended.

The Canadian government worked to erase our existence and has fought against any recognition of Indigenous lands and territories, only in very recent history have we seen Canada make any amends to their wrongs and work towards reconciliation with Indigenous Peoples. The Truth and Reconciliation Committee identified the act of performing land acknowledgements as a fundamental step towards reconciliation with Indigenous Peoples and as a result we have seen more and more land acknowledgements taking place.

This is just a glimpse into the suffering that Indigenous Peoples endured, but the repercussions of these tactics live on today. Most Indigenous Peoples inherited severe forms of intergenerational trauma and continue to suffer from on-going racism and discrimination. The modern perception that colonization is a thing of the past and that we should “just get over it” and essentially assimilate into settler society is an issue we consistently deal with. But the thing is, for many of us it isn’t a thing of the past. It’s our grandparents who were taken into residential schools, our parents who were stolen from their families in the 60’s Scoop, and our children who were raised in foster care systems which cared little for their wellbeing. Now in 2020, our children are still taken from us at the highest rates in Canada – Indigenous youth represent over 50% of youth in care despite only making up 7% of the total population.

Today, suppression and racism towards Indigenous groups continues and as a result Indigenous People are constantly advocating for rights, better services and opportunities for our people. Indigenous sovereignty and autonomy remain at the forefront of our advocacy as the health of our lands and territory are consistently under threat from corporations that decimate land for profit with little thought for future generations. Indigenous ways of life are directly correlated to land health and this is one of the reasons why land acknowledgements are so important. If you are concerned for the health of the lands and preservation of our natural world, then you should consider including land acknowledgements into your work.

How do I Perform a Land Acknowledgement?

So, with this information how can you respectfully perform a land acknowledgement? Well, the good news is that a Land Acknowledgement is actually rather easy to do! It’s more or less exactly as it sounds, a moment to acknowledge who’s land you are currently on.

The first step would be to identify who the Indigenous People to that territory are, if you don’t already know. It’s possible that there is more than one Indigenous group belonging to an area, don’t worry, acknowledge them all.

The second step is to take some time to learn about those Indigenous People, and not just about their traumas! Look into what traditional practices they had prior to colonization, what were their main sources of food, what cultural activities and ceremonies did they practice? And of course, take some time to learn about what colonial tactics were used there, how they were affected and how they are still affected today.

The final step is to write your land acknowledgement. If you have done your research and taken some time to learn about the Indigenous Peoples in your area, then this step should come more naturally and be more heartfelt then the simple “I would like to acknowledge that we are on the traditional territory of the X peoples” that is commonly done.

No matter how you perform a land acknowledgement, the recognition and intention is the most important aspect and it is so amazing to see this happening in more and more spaces.

How to Incorporate Land Acknowledgements into Your Business

Land acknowledgements are not just for presentations and events, many businesses incorporate Land Acknowledgements into their business practices without ever making a presentation! There are many fun and creative ways to do this, here are some suggestions:

You may also choose to go beyond a land acknowledgement and celebrate Indigenous Peoples and any holidays we may have! Consider celebrating National Indigenous Peoples day (June 21), maybe you feel compelled to join our activists as we fight for land protection, Indigenous and human rights, and epidemics such as MMIW (Missing and Murdered Indigenous Women).

How do we Move Forward?

It is never fun to examine historical traumas. I thank you for your time and commitment to better understanding this hard history. Knowledge of Indigenous history and an openness to learning more about our current place in society and struggles that we face provide the foundation for us to move forward together. Many of the ‘Indigenous issues’ that we advocate for are really human issues belong to all races and genders. If we work together to advocate for a better future for all then we will have greater success and unity between us so we can walk together as diverse and inclusive peoples.

No matter how big or small your inclusion may be, where you perform a land acknowledgement or how often you perform one, these efforts are part of a larger practice of reconciliation. There is no going back now, we cannot change history, but we can collectively work towards a better future for us all. We need to move forward together and in order to do this, reconciliation must guide the way.

If you are committed to reconciliation and want to understand more about how to include this into your life and business, I recommend you check out the upcoming Decolonizing Practices webinar. 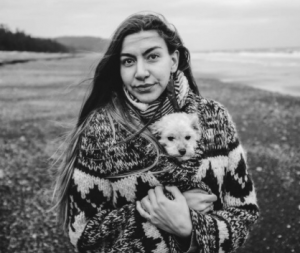 My name is Brianna, I am Nak’azdli from the Dakelh Nation and I belong to the Lusilyoo clan.

I was born and raised in the beautiful Coast Salish territory of the Musqueam, Squamish, and Tsleil-Waututh Nations, commonly known today as Vancouver, BC.