There are some recent changes in social media that make it more difficult for businesses to reach consumers.
The first change is that Facebook has reduced brands’ unpaid, organic reach. (Organic reach is the number of Facebook fans you can reach naturally without paid advertising.) According to a recent social@Ogilvy study, companies on average can now only reach 6.15 percent of their audiences. This is a substantial drop compared to October 2013 when brands’ average organic reach was 12 percent. 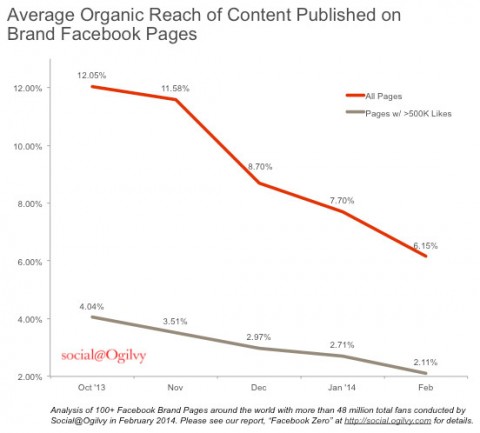 Facebook’s decline in natural reach is intended to encourage you to pay to promote your status updates since that’s one of the best ways to reach Facebook fans today. This subtly forced use of Facebook ad products will no doubt affect your company’s financials because you will have to spend ad dollars on both developing and distributing content. This additional expense can be particularly stressful if you have a limited advertising budget.

The second change is that Google has stopped investing in and promoting Google+ proactively because only 35 percent of its users utilize the service actively and the situation is unlikely to improve. 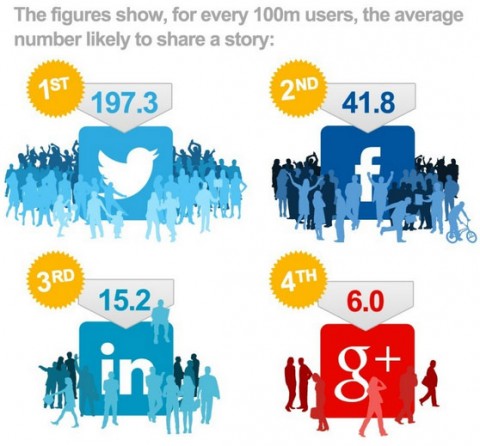 (Google+ has the lowest activity rate amongst the top four social networks)
Google’s shift in strategy now means you have one less social channel for distributing content. This also means you can’t leverage Google+ to increase your search rankings since fewer users will utilize Google+ in the future let alone “+1” Google+ posts – a negative because Google +1 is one of the most powerful factors in improving search results.
These results are especially damaging to small businesses because limited budgets mean you rely more on free social media to increase brand awareness and customer acquisitions compared to larger corporations.

Your Other Social Media Options

With Facebook and Google+ becoming less cost-effective communication channels, you should turn your head to other platforms to improve your brand presence and acquire clients.
Three effective, user-friendly social networks you can utilize are Twitter, Instagram, and Pinterest. These three networks have growing user bases, large organic reach and most importantly, garner higher conversion rates than either Facebook or Google+.
Twitter has a conversion rate of 2.17 percent and Pinterest has a rate of 1.02 percent. Moreover, while there aren’t any specific findings for Instagram’s conversion rate, studies have indicated that the use of Instagram improves companies’ overall conversion rates by 25 percent. Compare this to Facebook, which has a conversion rate of 0.74 percent. Google+ most likely has a rate of 0 percent since very few consumers actually use the Google-powered service, less alone purchase items.

In addition to the popular social networks mentioned above, another exciting, growing social platform small businesses can use is Weibo.
Weibo is the Chinese version of Twitter and reported over 50 million daily active users in 2013. The micro-blog can help brands tap into the Chinese-Canadian market, which is expected to account for roughly 6.9 percent of the Canadian population by 2031. Weibo’s ability to give businesses large reach in the Chinese-language market has induced North American companies such as Holt Renfrew, Fairmont Hotels, and IBM to create their own Weibo accounts.
Weibo is free and its setup process is straightforward; however you will need a person who understands simplified Chinese to help create the account.
Developing content is also very easy since you can repurpose images from your websites or other social media platforms for your Weibo account.
With Facebook organic reach declining and Google+ expecting to have an even smaller user-base in the near future, small businesses must find other social networks to promote their brands and acquire clients. I have recommended four platforms: Instagram, Pinterest, Twitter, and Weibo. These four platforms are new, expanding, and most importantly, deliver positive results.
If you have other social media networks to suggest, please share them with me on Twitter.