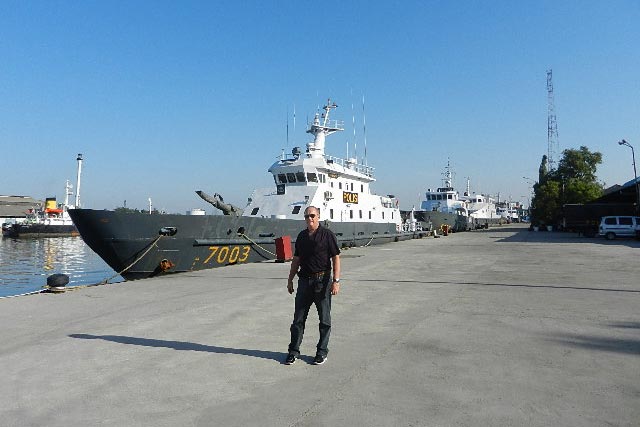 Everything changed for Bill English in the mid-’90s after a close call between two vessels off the West Coast, caused by a lack of technology.

Having created various software applications since the early 80’s, the Western Marine Community, Transport Canada and the Canadian Coast Guard turned to Xanatos Marine to make their seas safer and determine how the Automatic Identification System (AIS), a device that autonomously broadcasts vessel information to surrounding vessels and shore stations, could work on the west coast. This was the start of many technology firsts for Xanatos Marine as Bill grew his company.

Now, Xanatos Marine provides unique solutions for clients as diverse as the IMO (International Maritime Organization) to the Thailand Port Authority, from Port of Kaohsiung to The World Bank Group, and the governments of Indonesia, Malaysia, Singapore and Nigeria.

Entrepreneurship was a simple decision for Bill. He had always known he was going to own his own business. He liked the autonomy and being able to call the shots. But it’s not a journey that he took on his own. When first starting Xanatos Marine, he worked with his local Community Futures office and participated in several mentoring programs offered by his local college. When looking to grow the business, Bill turned to the Business Development Bank of Canada (BDC), as a resource to advance the business.

In 2014, Xanatos Marine took to the stage and won the very first Small Business BC Award for Best International Trade, recognizing that although they may be small, they have a huge impact on the international market. After deliberating the candidates, the judges expressed how impressed they were with Xanatos and were proud to have them representing Canada on the world stage. They also recognized the personal passion and pride that Bill takes in his company, which has pushed it to become the company it is today.

Thirty years after starting Xanatos Marine, Bill is most proud of the impact his business has on the regions that he works with. That what they do makes a difference.

One example of this is with the Indonesian Marine Police. Indonesia is made up of over 18,000 islands, some inhabited and some not, and the marine police are responsible for the entire coastline. With a small budget and a vast nation, they turned to Xanatos Marine to help boost the technology of their vessels.

Their solution changed their lives, allowing 16 of their vessels to transmit their AIS and ARPA (radar) from 60 km to over 2,000 km via radio waves, so they could send their patrols into the more remote areas and headquarters could visualize what’s happening around them.

Understanding His Clients and Reaping Rewards

Bill learned early on about the importance of understanding his clients when working in these international regions. He works closely with the Canadian Trade Commission to find information about the local business climate and common business practices, to help him understand the economy and help find and vet local agents and dealers, as well as closing sales.

It is a relationship that has paid dividends. He gives the example of a project where Bill and his partner were required to present to the client, alongside an extremely large competitor. Having spoken to the Trade Commissioner the week before the presentation, Bill knew that he was to go round the table and introduce himself to everyone. When at the meeting, he took his time and made sure he got each of the clients names correct, much to the disdain of his competitor. When it came to their time, the competitor simply gave his card to the person next to him and asked them to pass his card around the table. Before they were even given an opportunity to present, the client thanked the competitor for coming, but said that they would be contracting Xanatos Marine, as they had taken the time to learn their way of business. Bill says, “The Canadian Trade Commissioners provide an invaluable service which has had a significant impact on our business internationally.”

Bill’s want and ability to understand every individual client is what he attributes to his success. And it’s the success of his clients that propels and inspires him. “When you look at the selfless acts organizations like the Coast Guard take on, it’s quite inspiring,” he says. “Heading into a 10 meter swells and heavy winds to rescue a vessel, or jumping into freezing waters to rescue boaters from a capsized vessel boat and in doing so, risking their own well-being really inspires me to develop the technologies to help them.”

Bill believes it’s only by understanding your strengths and weaknesses can you become a successful entrepreneur. “Have an honest discussion with yourself, then seek out people that are successful in the areas of your weaknesses and learn from them, or hire them,” he advises. Yet his biggest piece of advice, “You’re going to make mistakes. Learn from them. Adjust your strategy and move on. Don’t give up”.

The Future of Xanatos Marine

For Bill the future of Xanatos Marine is simple: to remain the leader in maritime surveillance and continue to develop unique applications that help tackle industry challenges. “There is no technology that can replace the service that these organizations provide, but we’re dedicated to developing solutions to make their job safer and more efficient,” he explains.