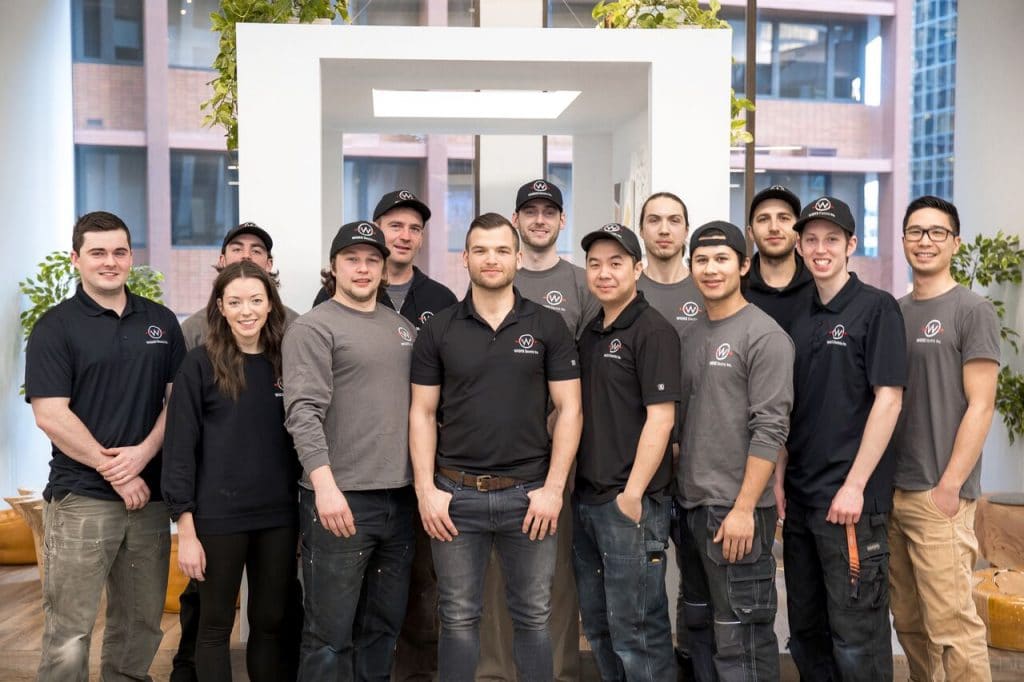 In a few short years, Adam Wicks has earned a reputation as one of BC’s brightest young entrepreneurs.
Named on BC Business’ Top 30 Under 30 List, his company, Wicks Electric, is the highest rated electrical contractor in the Lower Mainland. And, earlier this year, he took to the stage at the Vancouver Convention Centre to receive the trophy and plaudits as the 2018 winner of the Small Business BC Award for ‘Best Company.’
From an early age Adam knew he wanted to run his own business. Like many entrepreneurs he had to harness his adaptability and willingness to put in the hard yards to reach his goal.

Upon finishing high school, Adam began an electrical apprenticeship in 2007 with one goal in mind: acquire and master the skills necessary to start his own business. Unfortunately, life got in the way and plans had to be temporarily shelved. While working as an electrician Adam slipped and tore a ligament in his knee. Emergency doctors discovered a bone tumor during his treatment forcing him to undergo months of treatment and downtime. During this period, Adam took stock and developed his vision for what a great electrical contracting company would represent.
“I started Wicks out of the back of my 2001 Grand Cherokee in 2012,” he explains.
“I began with service calls and small jobs; anything to build up my client list. I had no business experience, so I spent my time reading business books, studying successful entrepreneurs, listening to podcasts and trying! It was a period of failing, learning and slowly growing. I learned a lesson in resilience and how to view failure – It should be looked at as a gift. It’s an opportunity to reflect and improve on how you’re doing things.”

With his business growing fast, Adam began assembling a team of first class electricians who shared his passion for the trade, while reflecting his values and positive energy. Through their hard work and stellar reputation, Wicks soon attracted blue chip clients such as Tesla; becoming the electric vehicle manufacturer’s preferred installation partner for private charging stations. Adam credits the success to the ‘team-first’ mentality he champions every day.
“My leadership style is anchored in a team mentality – the team always comes first,” Adam says.
“We kick ass and all take our jobs very seriously, but we have fun doing it. I have never once lost my temper on my team and I never will. When mistakes are made we stop, reflect, learn, evolve, grow and move on… My team comes first. Everyday. Forever.
“I want to continue to build Wicks into one of the most customer-centric and quality focused electrical contracting firms in the world. I want us to grow big but never lose our family-like connection and our culture. We will always be obsessed with improving, being more efficient and having fun while we work.”

When Adam started his business, he could hardly have hoped to achieve so much in so short a time. Plaudits, both individual and company-wide, have become a regular feature for the Bowen Island native. In February, Wicks Electrical was named ‘Best Company’ at the 2018 Small Business BC Awards, providing a springboard to future success for the business.
“Winning Best Company in BC had been amazing for us and has had a multitude of positive effects. For starters, it has given us a tremendous amount of credibility with new clients and contractors and has really helped attract a ton of high-quality electricians. It also provided proof that we are well on our way regarding our mission.
“As an entrepreneur you don’t always get a pat on the back. It’s a lot of hard work and it can be lonely. The award has served as a major source of inspiration for me that my hard work is not going un-noticed.”

Understandably, others are going to want to follow in Adam’s footsteps. In recent times he’s been the keynote speaker at BCIT’s AGM, and is a contributor to entrepreneurial panels at UBC and BCIT. With this in mind, we asked him what advice he’d give to entrepreneurs starting on the journey.
“The first thing I would talk about is mindset. It is so crucial to keep that resilient mindset. Business is hard, it’s lonely, but it’s rewarding if you keep the correct perspective. The chances of becoming a human are something like one in 400 trillion. When you think about it that way, we’re lucky to even be here on earth. An accounts receivable situation or a client complaining is no big deal! Look at your failures as an opportunity to learn and grow. How boring would life be if we just cruised along and never failed?
“Finally, be very clear and upfront about your personal and business morals, values, goals and vision.”